Worked w/ Asli Sevinc & Diego Rioja on this project. We took different sound clips and combined them into a one-minute sound piece.

I really like how it came out but I think there’s a slight problem with the noise balancing when going between different size speakers. Also, sorry about the huge .wav file.

I’ll start with Truax since that’s the easiest. This work came across as just a bit dated, but it was still very relevant. I like how he gave a pretty objective discourse and explained alot of facts. I learned a little bit about sound theory here that I didn’t know before.

I found his idea of “schizophonia” to be a bit amusing and really interesting. I’ve never thought of my relation to sound in that way before, but I have thought alot about how background music and ambient noise affects mood and performance. Some people do their best work in a quiet environment, but I find the quiet rooms here at school to be entirely too discracting!

END_OF_DOCUMENT_TOKEN_TO_BE_REPLACED

For our comm-lab assignment, I worked w/ Jason Rosado.
And here it is: 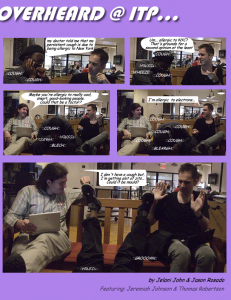 And here’s the code:
END_OF_DOCUMENT_TOKEN_TO_BE_REPLACED

So, read “The Work of Art in the Age of Mechanical Reproduction” by Walter Benjamin. He was a much easier read than the other Walter. There wasn’t much to respond to in reading his paper. The main section gave a fairly accurate and interesting description of what’s happened when moving from older forms of art to more modern forms.

Where the interesting bit comes in is in his preface and epilogue. Let’s start w/ his preface. He presents the idea that ‘creativity and genius’ are no longer usable or practical terms. I’d be forced to disagree there. They both are still valid and indeed, should be used in my opinion. He also says that about ‘eternal value and mystery’. I’m not sure about eternal value. I might have to agree with him on that one. I can’t see anything as having value forever. Mystery, i feel no way about.

The war bit at the end in his epilogue was kind of funny. The Marinetti quote just made me think… “Alright, if war is so beautiful, let’s see you go and enrich a flowering meadow on the front lines.” Sounds like a guy who does alot of talking, but not alot of doing.

Also, I’m not sure I got where he was going with all the Fascist talk. I didn’t quite get that. Felt like just oh-so-much-ranting.

Here’s our 1 minute video. We accidentally failed to record one scene and accidentally deleted another while slicing.

So here’s my repsonse to the waterfalls:MEH. Frankly, I was underwhelmed. They were just… there. Oh, and at night they lit up.
And my response to Ong: The first thing I have to say about Ong is … Wow, this guy can really talk.. er, write. He somehow manages to take a simple idea and expland it into multiple paragraphs through use of examples. I think this reading would be alot easier to follow if he dispensed with all the references to other texts and such. It’s just waaaay too long winded for my tastes.
Ong says that a literate person can never truly recover a sense of what the word is to purely oral people. I think that he should perhaps have said that they can never capture it. Being literate, they probably learned to read at a young as and never had the sense that pure oral people get. Though if he said that he’d be wrong. My family has a tradition of storytelling to the young children and these stories tend to carry over through the generations w/o being written down.
Really, I had no idea such controversy existed over the Illiad and the Odyssey. I found the idea that Homer’s group was illerate to be a bit interesting. But only a bit. I found Parry’s work to be pretty hilarious though. A couple of the most famous works of literature made up of cliches and literary formulae.
The bit about oral cultures being made up of literary formulae I agree with. Proverbs are far more commonplace in primary oral cultures.
I’m up to chapter 3 and there’s still not much I can say about this. Most of what’s here seems like, “Oh yea, that’s true.” It’s getting more interesting though. I like the case studies.
Overall impression: Very DRY (Kind of like having biscuits w/o tea).