An idea I’m working on with Jorge Just. It may all change but here’s the basic mockup. The main premise is that there anyone can upload a story in audio, video or picture essay format. Limited to 2 minutes in length or 5 pictures in the case of the essay. They give 2 choices for continuing the story and other users vote on which storyline they wish to see continued.

The other side to this is that for any storyline taken there is a road not taken. Once a vote is made, the other choice becomes open for any other user to continue the story along that path. Here, pics. 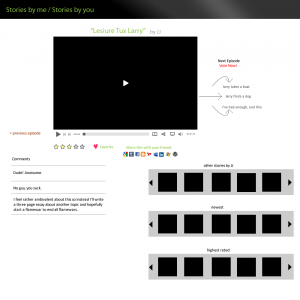 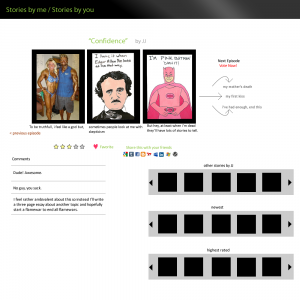 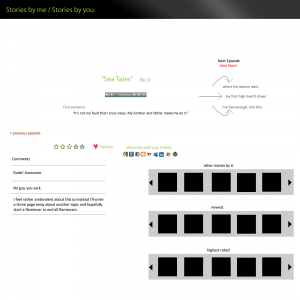 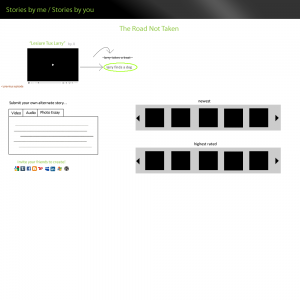 I found the audio pieces to be quite interesting. He has a good description voice and a very good sense of flow and poetry. The only failing is that, to me it was rather too long. I have a problem where, if someone is talking for more than a little while, i tend to zone out/go on mental tangents/look references up on the internet.

The transmedia reading was actually pretty interesting, considering the project I’ve been thinking of working on recently which will involve multiple forms of media. I’ve been aware of the matrix example for a while, in fact even open a copy of the animatrix. However, I find that when the media is dispersed, it can be quite annoying if done in a way where a certain essential piece of the story is placed in a different location than the media you are currently perusing. If its merely offshots and additional material rather than core content, however, it can be very satisfying to track it down in my free time.

Recently viewed a TED talk by jonathan harris. It was pretty good. The main thing that started me thinking was his comment on breaking a story into colors. I’d never thought of a story having a color before. Also, all of the projects shown there were not your average storytelling projects. It really makes you think about exactly how to tell a compelling story, especially in non-traditional ways.

A second attempt at telling a minimalist story. This one didn’t go so well. I need to go back and redo the timing.

This is a response to the tree museum. I felt it was good in theory, but failed in practice. Though I did enjoy a nice bottle of wine there after I stopped trying to find tiny little plaques.

Here is a story told from 3 different perspectives. Carlos y Linette.
Ware ye, the faint at heart, this piece doth contain no small amount of profanity.

A fanfic based on Joseph Conrad’s Heart of Darkness.

Thinking up and writing this was alot of fun and I had to do alot of research (about the victorian era especially). Not sure I captured the feeling I wanted but overall, I’m happy with it so far. I kind of want to expand it and expand Kurtz more.

“It has come to my attention recently that there has been a bit of a fuss regarding the death of one Mr. Kurtz. Quite frankly, I believe the management up at Central is making a big deal over a small matter… as usual; though I must admit that the shock of the news, once received, caused me to spill my tea on my morning paper.”

My uncle shifted in his seat as he reached to pour us both new cups. The lavender scent of the tea hung in the air as he performed the task. Uncle was, in this, as in all things, very careful. Watching him pour tea seemed somehow very ceremonious and I took the time to examine him again. It had been some 3 years since we had last seen each other and receiving a summons to come visit him was, though unexpected, a pleasant surprise.

END_OF_DOCUMENT_TOKEN_TO_BE_REPLACED

I had no idea such a community of spoilers existed. It was rather startling for me, for whom a spoiler is generally a frowned upon thing. However, given the amount of speculation that goes on over any given popular thing on the internet, it doesn’t seem like that great a leap for there to be another group of people who just “have to know.”

The struggle that corporations have with their intellectual property being dealt with in whatever manner a fans sees fit will probably never go away as long as they’re interested in making money. Both groups feel a strong sense of entitlement. I’m on the side of the fans as long as they’re not trying to make money off of someone else’s work. As long as that’s the case, who cares really what they’re up to?

I decided to do a 6 word story and 55 word story as those seemed alot more challenging than a 400 word story. I’ve always been a fan of getting as much information across as consisely as possible, but sometimes… it’d difficult. Especially choosing a topic.

Surrounded by friends: my first kiss.

A day in the life

Came up with a plan.

Met my boss. We brainstormed “the situation.”

Except, not in that order.